In Memory of Steven Marcus 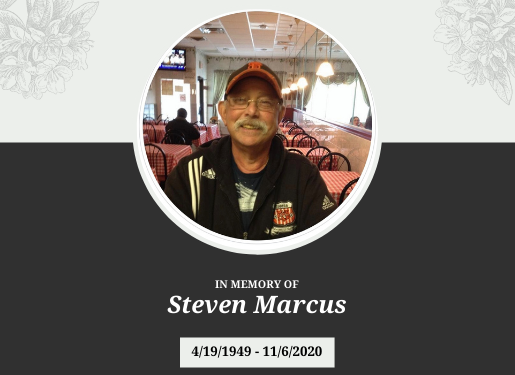 The news of the passing of Steve Marcus, followed by the passing of his wife, Lisa, stunned and saddened the North Rockland community. They had fallen victims to the pandemic that has taken too many lives in this country, and abroad. Both Steve and Lisa died in Good Samaritan Hospital, shortly after being admitted for serious symptoms of COVID-19. They left behind them two sons, Lorne and Ryan, as well as a community of people who knew and loved them. The virus also stole from them the chance to be surrounded by their loved ones as they left this life, and the opportunity for gatherings where people could share their memories of them. We, at the NRSA, would like to acknowledge and remember Steve for all he brought to our club during his lifetime.

Steve Marcus began a career with the NRSA that lasted for over 25 years. He coached his first girls travel team in 1996, and found that he enjoyed his work in the club so much that he decided to become more involved by joining the board of directors in 1999. Steve was instrumental in helping the club grow into one of the most prominent clubs in the region, served as President of the Board of Directors, and became one of the most recognized faces in the NRSA. Steve handled all the team bank accounts, merchandising, and was involved in the expansion of the snack shack and the building of the new board room. He remained an active member until 2017, when he stepped down due to health reasons.

Steve was a community guy. Through his own business, he was involved in the making of tee shirts, championship jackets, and other merchandise for the schools, CYO basketball, Stony Point Little League, and many other organizations in Rockland County. He was an umpire for little league for many years as well. But, The North Rockland Soccer Association, was his home base, when it came to where he devoted his time, his energy, and most of all his love for the community.

In 2002, he became the head coach of the girls travel team, NR Heat, staying with the team through 2008, and led them to be ranked #6 in the state. The girls he coached loved him dearly. They visited him often and in an expression of love and unity, when his mother-in-law passed away, the entire team showed up, dressed in their team jerseys, to sit shiva with the family. This is the type of impact Steve had on those who knew him. To those girls, he was more than just a coach who developed them to play alongside the highest-ranking teams in the state; he was a man who cared enough to hang in there with them, he was the man who they knew believed in them; which helped them to believe in themselves

How to express, in a few paragraphs, all Steve brought to the NRSA, and what he was to us is impossible. To say he was a character, is understating it. His energy was infectious, and his passion for the club was immeasurable. It’s easy to remember him sitting in front of the shack, a table full of merchandise laid out in front of him, his long white mustache falling around his mouth, a cap on his head, and a smile that would warm even the coldest day. Many people would hang around that table just to talk with him. He had a way of making us laugh, making us smile, and knowing that he would be out there week after week became as expected as the games that were played on the fields over the years.

His heart was full, his mind was sharp, and his love for the club and the children who played there, can still be felt all over the field. Long after his sons grew up, and he had stopped coaching, he continued to give his time and energy to keeping the club going. It is no overstatement to say that he made a lasting impression on every person he met.

Now, when all that there is left to do is remember him, it’s difficult not to realize, as if for the first time, how much he meant to so many of us. Can we think of North Rockland Soccer, and not think of Steve? Can we look at the uniforms on the backs of our kids, and not remember the man who helped to fit hundreds of kids into those uniforms? He had a hand in every aspect of the organization, and he will forever be embedded in its history. His place at the table, can never really be filled again.

Maya Angelou once said, “I’ve learned that people will forget what you said, people will forget what you did, but people will never forget how you made them feel. I believe Steve will be remembered fondly. His passion and energy will live on and is embedded in the soil that covers our playing fields. We shall remember his smile, his laughter, and his charismatic charm. We shall miss him greatly. We shall never forget who he was and what he meant to the people of the North Rockland community, and the North Rockland Soccer Association.

With love and sadness,